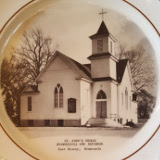 The congregation was organized in 1865, making us one of the oldest existing congregations in McLeod County. The 17 originating members were of German heritage. The early settlers first held services at the Philip Block home and then in the school near Biscay.

In the late 1860’s the 40-acre site where the church now stands was purchased, and the first church was built. It burned down about 1890.

All the original services were done in German with the official language changing to English gradually during the mid-late 1920’s and into the 30’s.

Our name has changed over the years. The original name of our church when it was incorporated in 1868 was First Lutheran Church and Society of Glendale, Minnesota. Now, some refer to us as “The Biscay Church”, officially our name is “St. John’s Church”.